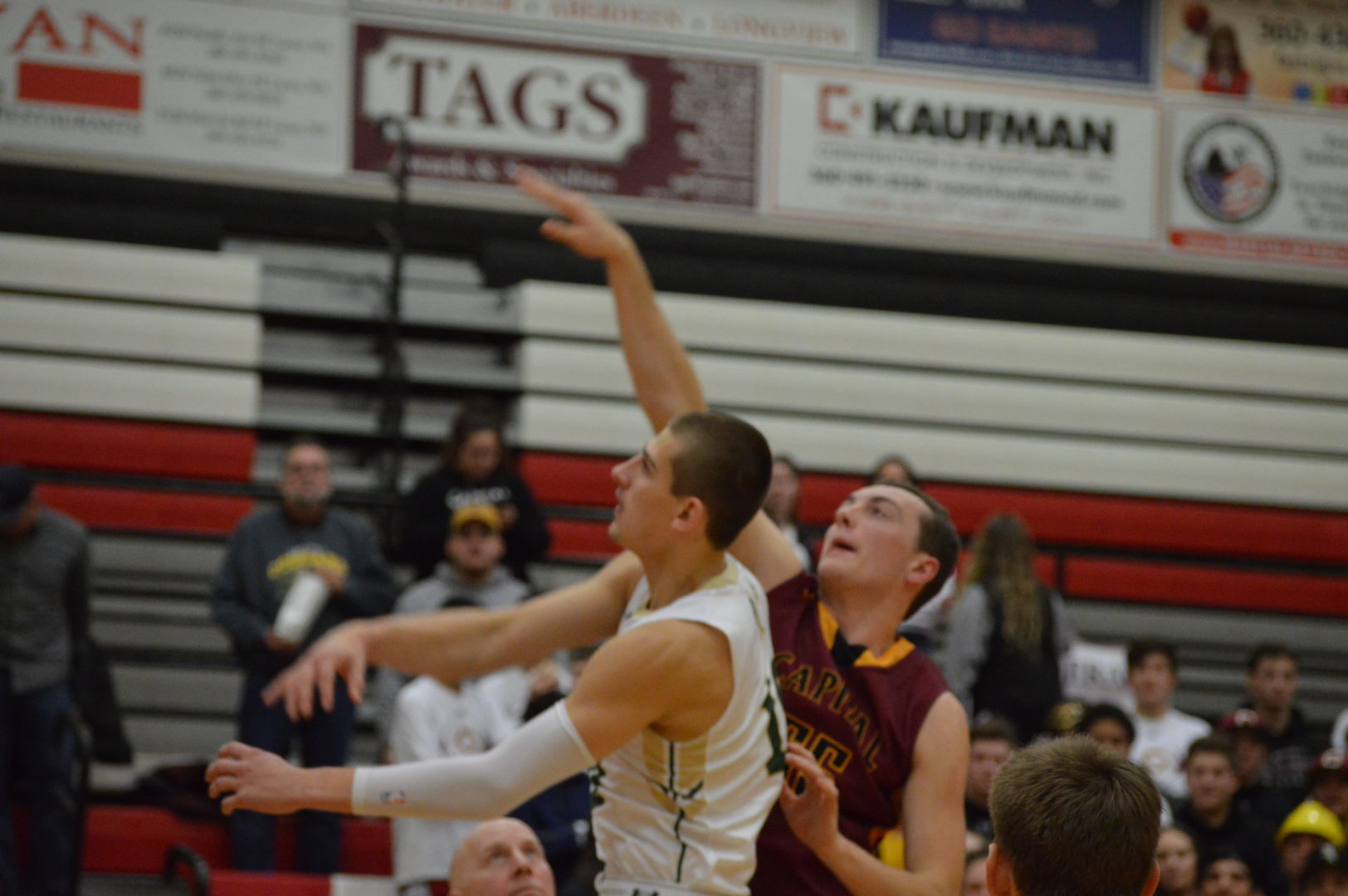 (Lacey, WA) The South Sound Conference early on appears to be a battle in Thurston County with Timberline, Capital and North Thurston all at 2-0 entering Wednesday night’s games and the Blazers and Cougs were set to face off in an early season showdown.

The 1st 2 quarters were complete opposites with the Blazers taking a 17-13 lead over the Cougars. Stevenson led Timberline with 7 but then would get shut out in the 2nd quarter while the Cougars flipped the script scoring 18 and holding the Blazers to just 8. Chris Penner, Brett Stock and Grant Erickson all had 8 in a well balanced scoring attack.

In the 2nd half it was a completely different story as the Blazers defense showed up big time. Pressing the Cougs with Stevenson, Eli Morton and Hunter Campau the Blazers made it tough for the Cougs to get out of the back court, in fact getting one 10 count. When the Cougars did get it over the mid-stripe Timberline’s pressure continued forcing several turnovers or errant shots.

Stevenson who scored only 7 in the 1st half picked up the offense with 21 of his 28 total points including 7-7 at the line. Stevenson, Morton and Campau also combined for 8 3-balls in the game. Casson Rouse came off the bench and added some tough defense and 6 points while Jamin Faalogo worked the inside and had 5.

Capital’s overall defense was pretty solid overall giving up just 63 to the high powered Timberline offense but their own offense sputtered with just 19 2nd half points led by Erickson’s 16.

We talked with Stevenson after the game who again finished with 28 which Timberline coaches thought tied the school’s all-time scoring record but had to confirm some of Stevenson’s game totals but that was the furthest thing from Stevenson’s mind. The Witchita State commit was pleased with the defense they played in the 2nd half calling the 1st half effort “unacceptable”. He says the scoring record is not his it belongs to all of his team mates who pass him the ball and put up with some of his “bad” shots.

With at least 15 more games to play whether or not he beat or tied or came close to the scoring record is really a moot point it will be his for certain the next time they hit the court. Stevenons’s focus is on the W and last night the Blazers racked up their 5th of the early season to improve to 5-0 and 3-0 in SSC play. Stevenson had high praise for Capital saying no doubt the 2nd time they face each other could very well be for the SSC title but there is a whole lot of hoops between then and now.

Our Pacific Sports Spa Players of the Game went to Erik Stevenson for Timberline and Capital’s Grant Erickson.