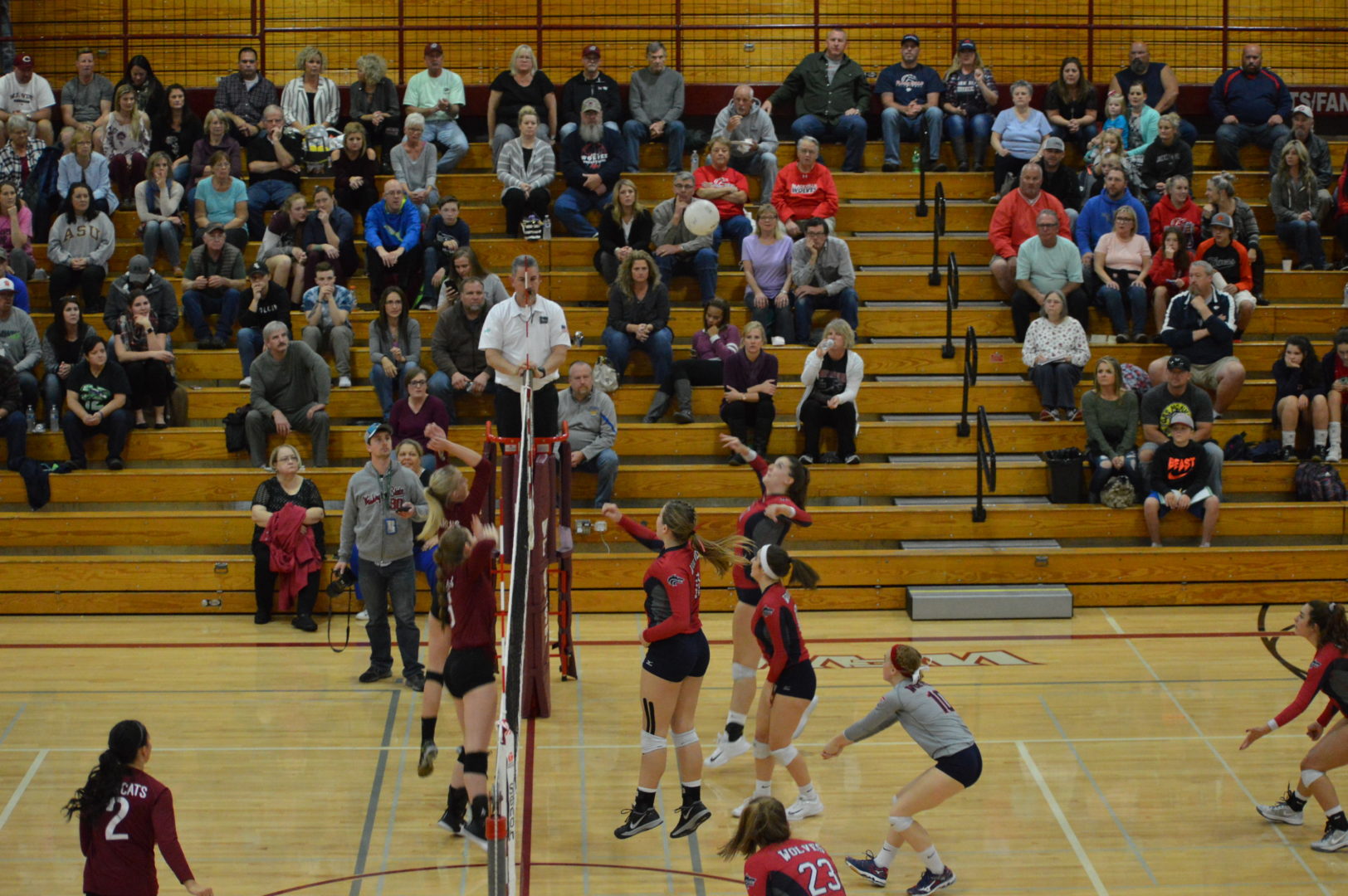 (Chehalis, WA) There was a lot on the line when the Wolves traveled to the twin cities to face the Bearcats. Black Hills could wrap up 2nd place with a win and the Bearcats were still alive for 2nd if they could knock off the Wolves.

Black Hills coming off an upset loss at Centralia last week which spoiled their hopes of facing 1st place Tumwater on Thursday with the league title on the line. The T-Birds have clinched the championship with their 3-0 win over Rochester tonight.

But 2nd place was huge because you get to host your 1st round match-up in next week’s district tournament and avoid having to face GSHL powerhouses Woodland or Ridgefield.

The 1st set saw the two teams battle back and forth with a point lead here and a point lead there until Black Hills’ Emma Goodman stepped up to the serve line and fired off 3 straight points to give the Wolves a 3 point cushion they would never surrender. Hannah Rongen during this run had 3 huge kills to pace the Black Hills net play.

Black Hills stretched that lead to as much as 6 but the Bearcats fought back to pull within 3 trailing 23-20. But it was not enough as the Wolves closed it out with the 3 point, 25-22 win to take the 1st set.

It appeared the Bearcats would get right back in this match as they pulled ahead by as many as 6 points when Payton Crawford reeled off 5 straight points to push their lead 10-5 and they led 15-10. During this run Ashlee Vadala had a tremendous kill shot and strong net play from Makenzie Moore.

The Wolves decided at this point to kick it back into gear and ran down the Bearcats beginning with a 4 point run at the service line from Goodman to give BH their first lead of the set 17-16. Rongen had 2 big blocks during this run and Maisy Williams fired one between defenders as well. The Cats were hanging tough trailing 19-18 when Brenna Nelson scored 3 points from service featuring another dominating boom kill from Rongen to push it to 22-19 and they closed it out from there with a 25-19 win going up 2-0. When the Wolves were trailing the Bearcats 15-10 they then went on a 15-4 run for the comeback win to go up 2-0.

That momentum the Wolves picked up in the 2nd half of the 2nd set continued into the 3rd set and they quickly built a 7-1 lead and never looked back cruising to an easy 25-12 win to complete the sweep and clinch 2nd place. The Wolves are now 7-2 and will finish league play hosting Tumwater.

Centralia swept Aberdeen 3-0 and pulls into a tie with Chehalis both at 5-4. The Bearcats will travel to Centralia on Thursday with 3rd place on the line. The winner will automatically enter the District Tournament traveling to Ridgefield while the loser will have to play whomever ends up as the 5th place team in a pigtail loser out with the winner traveling to Woodland for their District opener.

Our Pacific Sports Spa Players of the Game went to Black Hills Hannah Rongen and WF Wests’ Payton Crawford. The ProActive Physical Therapy play of the game went to the Wolves’ Emma Goodman for her stretch of serving in the 2nd set turning it around leading to the run for the win which carried over to the 3rd and final set.