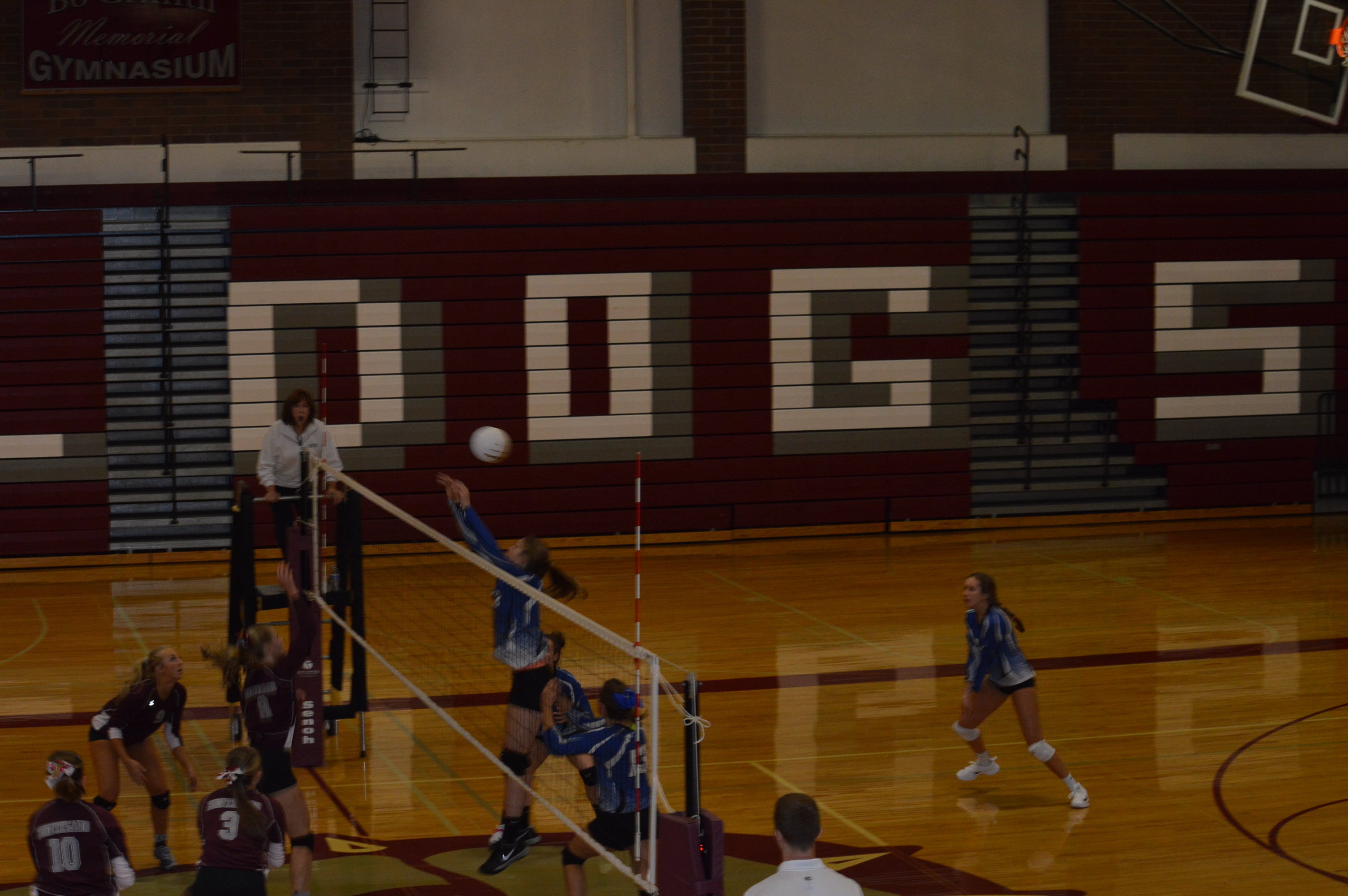 (Montesano, WA) The Elma Eagles came into this match flying high with 4-0 Evco 1A league mark and 9-1 overall with their only loss to a very good 2A Black Hills team. They swept the Bulldogs the 1st go-round 3-0 and came in aiming at the season sweep.

The Eagles jumped out to an easy lead winning set 1 and 2 25-14 and 25-18 and appeared they would cruise to the season sweep of their rival the Bulldogs and do so without losing a set. In those first two sets Quin Mikel and Ana Perez were solid at the service line while the lone senior Kenna Stoney was all over the court digging, saving, blocking and killing. Jalyn Sackrider was a monster at the net while Kali Rambo and Maddi Clark added to the dominate start to this match.

As the 3rd set began you could see a huge swing in momentum as the Bulldogs actually relaxed with nothing to lose and the Eagles relaxing even more with a big lead. Montesano took their first lead of the match and Elma quickly realized this was not going to be handed to them. With a 2-point lead 12-10 and 13-11 the Bulldogs Lindsay Pace came up with a pair of devastating kill shots to keep the lead.

Later in the set Mikel then countered those kills with a couple of her own and Elma surged to the lead and it looked like the Eagles would get that 3-0 sweep when Montesano again dug down deep and got a key kill shot from Jessica Stanfield and then Hannah Hatcher finished it off for the 25-23 win forcing a 4th set.

In the 4th set again it would go down to the wire with some confusion late that would take more than 10 minutes to get figured out. One of the key runs for Montesano was Emma Jensen’s serve run pushing the Bulldogs from a 9-6 lead to 14-7. That would be countered by Elma’s Baylee Crisp who reeled off 7 straight and when she was done the Bulldogs lead was down to 17-15.

The controversy began with Montesano leading 22-19 but Elma’s Clark with the serve and she scored 2 to make it a 1 point game again. On her next serve the Bulldogs returned a shot long and the initially was awarded to Elma which would have tied the game at 22. But after Hatcher requested the head official to check with the side officials it was determined that the Eagles had touched the ball and the point and serve shifted back to Montesano with a 23-21 lead.

The confusion really began when the head ref then motioned for the Bulldogs to serve while Elma Coach Kendra Henry was still talking with her captain and the side official. The ball landed in with Elma not even moving toward the ball and the head ref believing it was an ace then called for another serve only to then seemingly understand her side judge and Henry were in a discussion.

So after a lengthy discussion it was determined the ball was touched by the Eagles at 22-21 and that the next serve would not count and a do-over was called. Montesano led 23-21 and closed out the set 25-23 to force a 5th and final game.

As the deciding set began you could see a different Eagles team who had regained that focus they had at the beginning of the match and quickly ran up a 7-2 lead. Sackrider and Mikel had a pair of key kills and Sackrider came up with our ProActive Play of the Game when she changed tact in the middle of what looked like another huge kill shot when she soft served dropped it in for a point. Crisp also had another strong run at the service line pushing it from a 10-6 lead to 13-7 and the Eagles completed the job they thought would be over in 3 straight.

Elma is now 5-0 in league play while the Bulldogs dropped to 3-2. Our Pacific Sports Spa Players of the Game went to Elma’s Kenna Stoney for her all-around effort and to Montesano’s Hannah Hatcher who also was a strong leader on the floor for the Bulldogs.

Kenna Stoney on leading the young Eagles to another win