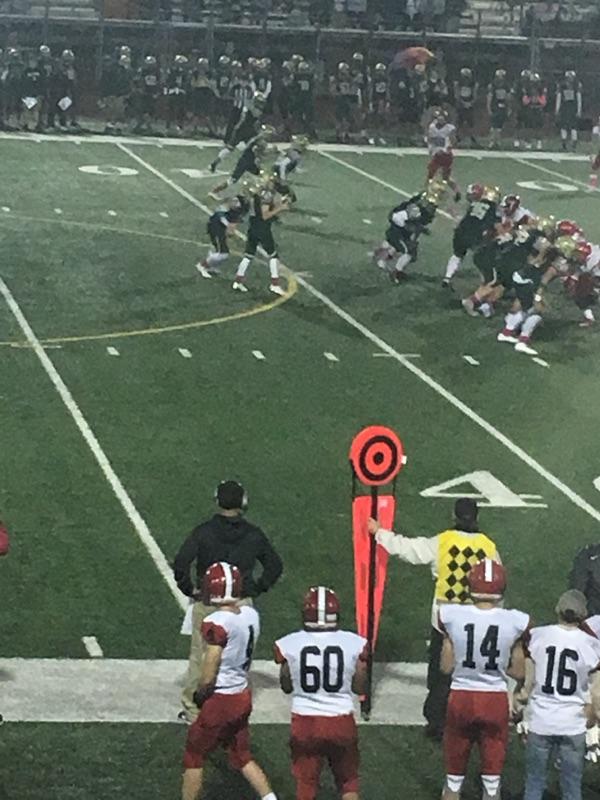 (Lacey, WA) Timberline High School was looking up at visiting Yelm on Friday night. Two big plays by visiting Yelm had the Blazers, ranked 7th in Class 3A, looking at the short end of a 14-10 halftime score.  The Tornados had countered Timberline’s first touchdown with a 90-yard Carson Ament kickoff return and grabbed the lead four minutes before intermission on Kyle Robinson’s 16th touchdown pass of the season, a 33-yarder to Kodee Gifford.

Then, Michael Barnes and the Timberline offensive went to work.  Held to just 28 yards rushing in the first half, Barnes gained 100 in the second to end with 128 on 29 carries.  Lonnie Anderson ended the game with 10 carries for 58 yards. Quarterback Hunter Campau, using both designed keepers and scrambles, totaled 92 yards on 24 carries.

“We started getting a good push from our line,” said Barnes.  “I trust my guys, I was just following them.”

The Blazers (6-0, 4-0 in the SSC) also turned in a stellar defensive effort. Robinson, who came into the game completing 57 percent of his passes for 1,227 yards was held to seven completions in 27 tries for 109 yards, with two interceptions and the touchdown pass to Gifford.

“Their quarterback is legit,” said Timberline coach Nick Mullen.  “We played our game and held them to only two big passing gains.”

Timberline took a 7-0 lead midway through the first quarter on an eight-yard touchdown run by Campau, only to see Amendt even things with a sprint up the left sideline on the kickoff.

A 28-yard field goal by Toby Selvester reclaimed the lead for Timberline before Robinson found Gifford to give Yelm (4-2, 3-1) its halftime edge.

Timberline caught a break just when it looked like it had squandered a break to take the lead for good.  Jamin Faalago fumbled the short opening kickoff of the second half, but alertly recovered it himself to seemingly give the Blazers a first down at their 45 yard line.  But one of three personal fouls against Timberline on the night set them back and the Blazers were forced to punt on fourth-and-23.

The punt seemed about to roll dead, when it hopped up and hit Yelm return man Jacob McCown in the ankle, giving Timberline a chance to recover at the Tornados 32. From their, the Blazers drove in to score on a one-yard run by Campau.

Barnes iced the game for the Blazers with a four-yard touchdown run five and a half minutes before the end and was selected Pacific Sports Spas Player of the Game for Timberline while James Palmer, who rushed for 63 yards on 10 carries and caught two passes, earned the honor for Yelm.  Timberline’s recovery of the muffed punt by Yelm, leading to the go-ahead touchdown, was the ProActive Physical Therapy Play of the Game.