(Tumwater, WA) These 2 teams came into this non-league match-up preparing for the heart of their league runs and both looking to run their records to 3-1. The game was meaningless on paper but maintaining momentum was something both squads were looking to do.

Both teams have been relying heavily on their defensive play to stay in and flat out win games and both defenses again were front and center as you can tell by the final score.

Between brilliant defensive plays and self induced mistakes like untimely penalties, fumbles and interceptions it would take all 24 minutes of the 1st half before any points would light up the scoreboard. Evergreen’s Freshman kicker Eli DelAngel knocked through a 25-yard field goal as time expired giving the Plainsmen a 3-0 halftime lead.

As the 2nd half began and a trade of possessions the Plainsmen were driving when the Wolves secondary would strike again. Coming into the game the deep 4 had collected 7 interceptions in 3 games. Taylor Simmons had a pair of them last week at Prairie and he stepped up with another picking off Evergreen QB Triston Fich and returned it to the 41 when a personal foul was called on Evergreen and then an unsportsmanlike conduct and after the officials were done pacing off the yardage the Wolves got the ball on the Evergreen 31 an d in great position to take their first lead.

But once again the one step forward, two steps back offense mostly due to penalties they could control with false starts and delay of games put them in a 4th and long. Wolves QB Ethan Loveless dropped back and hit Wyatt Rollman at about the 23 and he needed to get to the 21 for a 1st down when Jerontae Burns delivered a huge hit and tackle denying Rollman the 1st down by about a half yard and Black Hills turned the ball over on downs to Evergreen. This play ultimately would be honored as our ProActive Physical Therapy Play of the Game. Had Rollman gotted the 1st it very well could have changed the outcome.

As the teams exchanged 3 and outs Evergreen again began a drive and they did rack up 321 yards of offense but as you can see with 9 points the Wolves defense was extremely stingy when they got on their side of the 50.  Fich and the Plainsmen looked a little more determined on this drive but it was that Simmons guy again stepping up with yet another pick, his 4th in the last 2 games and the Wolves secondary’s 9th in 4 games. Simmons looked like he might take it to the house when Fich ran him down at the Evergreen 28. But the 60 yard return put the Wolves at the doorstep of the Plainsmen and a chance to get on the board and take the lead.

Preston Lee would run the ball 12 yards to the Evergreen 14 and then got another 2 to the 12. then again the Wolves would self destruct with an ill-timed false start and found themselves facing a 3rd and 11. Ethan Loveless would step back to pass when saw an opening and went for it and not only got the 1st down but ended up in the endzone for the touchdown. The PAT failed but Black Hills suddenly led 6-3 with 8:15 to play in the game.

Evergreen did not flinch as they took over on their own 36 with 8:08 left to play. It looked like several times the Wolves defense would hold and force a punt but time and again Fich and the offense would come up with big plays. Miguel Cruz, Nadil Hodzic, Trent Hemann and Zyell Griffen came up with big plays while driving the ball and taking a ton of time off the clock. There was no play bigger than a 3rd and 9 from the 20 when Griffen busted off a run to the 1. On 1st and goal Fich tried to power his way in but the officials say he was stopped. This wasn’t exactly great news for the Wolves as the clock kept ticking and on his 2nd QB sneak Fich was in and the Plainsmen had re-taken the lead 9-6 with only 1:23 left to play. The PAT missed so that left open the chance for the Wolves to just kick a field goal to tie the game.

The Wolves got a great kick return to their own 44 and drove down to the Evergreen 32 when a false start pushed them back and Evergreen was then able to hold and got the ball back on downs with just 16-seconds to play. They took a knee and clinched their 3rd win of the year while Black Hills dropped to 2-2.

There were 2 more players who also had special games for Evergreen he played both offensive and defensive tackle Alex Rodriguez who batted one ball down and had several tackles and played all game on the O-Line caught our eye and the Wolves Taylor Simmons who had 2 interceptions and ran the ball for the Black Hills offense finishing with 49 yards. These 2 earned our Pacific Sports Spa Players of the Game award.

Evergreen will next face Prairie in GSHL 3A league play while Black Hills will host Centralia in their Evco 2A league opener.

Mon Sep 25 , 2017
9/25/17 (Renton, WA) The Bellevue High School Football team will get to play in this year’s post season if they qualify after the WIAA Executive board reduced their penalties regarding recruiting violations over an extended period of time under then Head Coach Butch Goncharoff. An independent investigation ordered by the […] 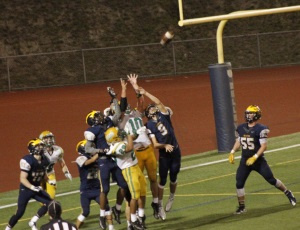