(Lacey, WA) Both the River Ridge Hawks and Orting Cardinals came into this game looking for their 1st win of the season. The Hawks a little more urgent after dropping a tight one to Steilacoom last week 12-6. Coach Steve Schultz said prior to the game that he was looking for improvement in 2 specific areas, tighter coverage on defense and a more consistent running game on offense and both of those goals were achieved by the Hawks.

They got things started on their 1st drive going 80 yards mostly on the ground with Brian Melloy finishing it off with an impressive 29-yard run. The offensive line created a huge gap for Melloy this play off tackle behind Herb Polu and Carlo Cook. Fullback Ryley Larson also provided a key block to spring Melloy. The PAT was also an adventure when Blake Anderson, the holder, couldn’t scoop up a low snap so he grabbed it and took off around the left end and in for the 2 point conversion for an 8-0 lead.

Orting’s turn was next and they returned the kick-off to their own 34. The Cardinals ground attack was just as potent led by Ethan Hobart who ripped off a 33-yard run then a 12-yard dash setting up Orting’s touchdown. Hard-running Bryce Mecham finished it off from the 5 and Tristan Lea booted the PAT and it was 8-7 with 5:16 to play in the 1st quarter.

The Hawks then answered with their 2nd 80-scoring drive in as many tries. This time it was Maleko Mina who finished off the scoring drive with a 4-yard run. The TD was set up with 2 key plays a 21-yard 3rd down completion from Tomasi Manu to Max Eder and then Manu picked up a key 1st down on a 3rd and 9 with a 10-yard gain. After the score the PAT was blocked and Ridge led 14-7.

The Cardinals appeared set to answer but as they crossed midfield they were facing a 3rd and long when QB JK Crespo dropped back to pass and as he cocked his arm RR’s Jarett Stalcup slapped the ball our of Crespo’s hand before he began to throw the ball forward and Griffin Adams scooped up the loose ball and returned it 56 yards for a Hawks touchdown. Jacob Miller tacked on the extra point and it was 21-7 which held to halftime. This play also took the honors for our ProActive Physical Therapy Play of the Game.

Orting would get the ball to begin the 3rd and one good drive would put them back in the game. Crespo and company began on their own 31 and came right back running the ball right at the Hawks defense. As they approached midfield the Cards tried to change things up with a play-action pass but Kieran Hunkin read it from the start and picked the pass with nothing but green in front of him and he took it to the house for a 41-yard interception touchdown. The PAT failed but RR led 27-7.

The Hawks sealed the game early in the 4th quarter after an errant snap on an Orting punt attempt rolled down to the 13 and RR took over knocking on the door. Manu scrambled for a 13 yard scoring run while Miller added the extra point to make it 34-7 with 10-minutes to play and that is how it would end. The Hawks are now 1-1 in league play and 1-2 overall while the Cardinals drop to  0-1 and 0-3.

Our Pacific Sports Spa Players of the Game went to the Hawks’ Brian Melloy and the Cards Ethan Hobart. 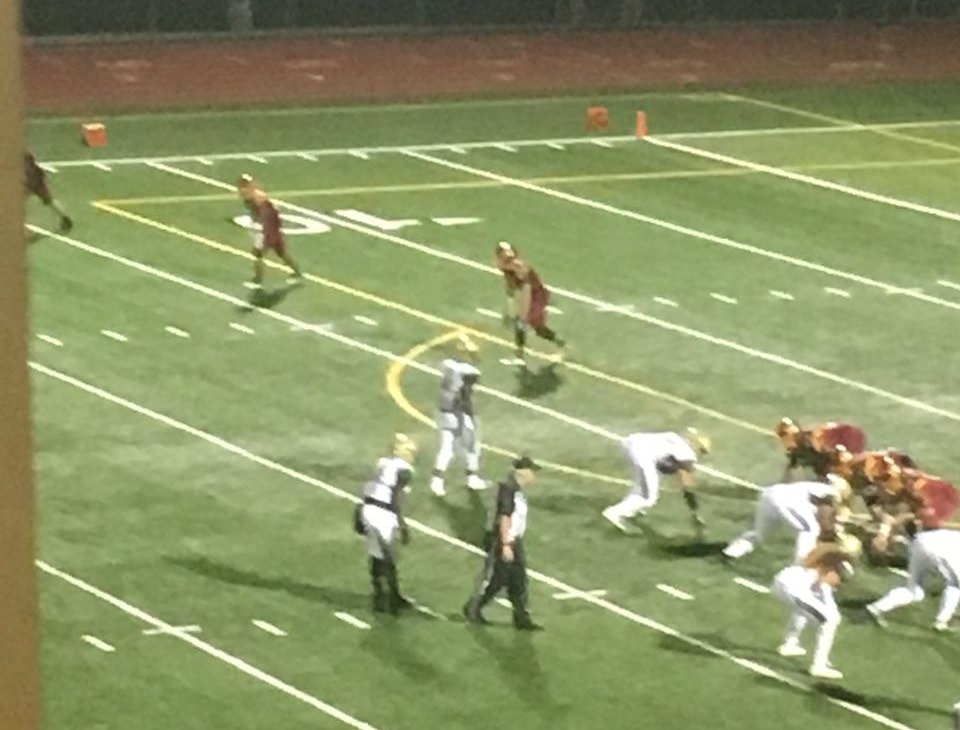