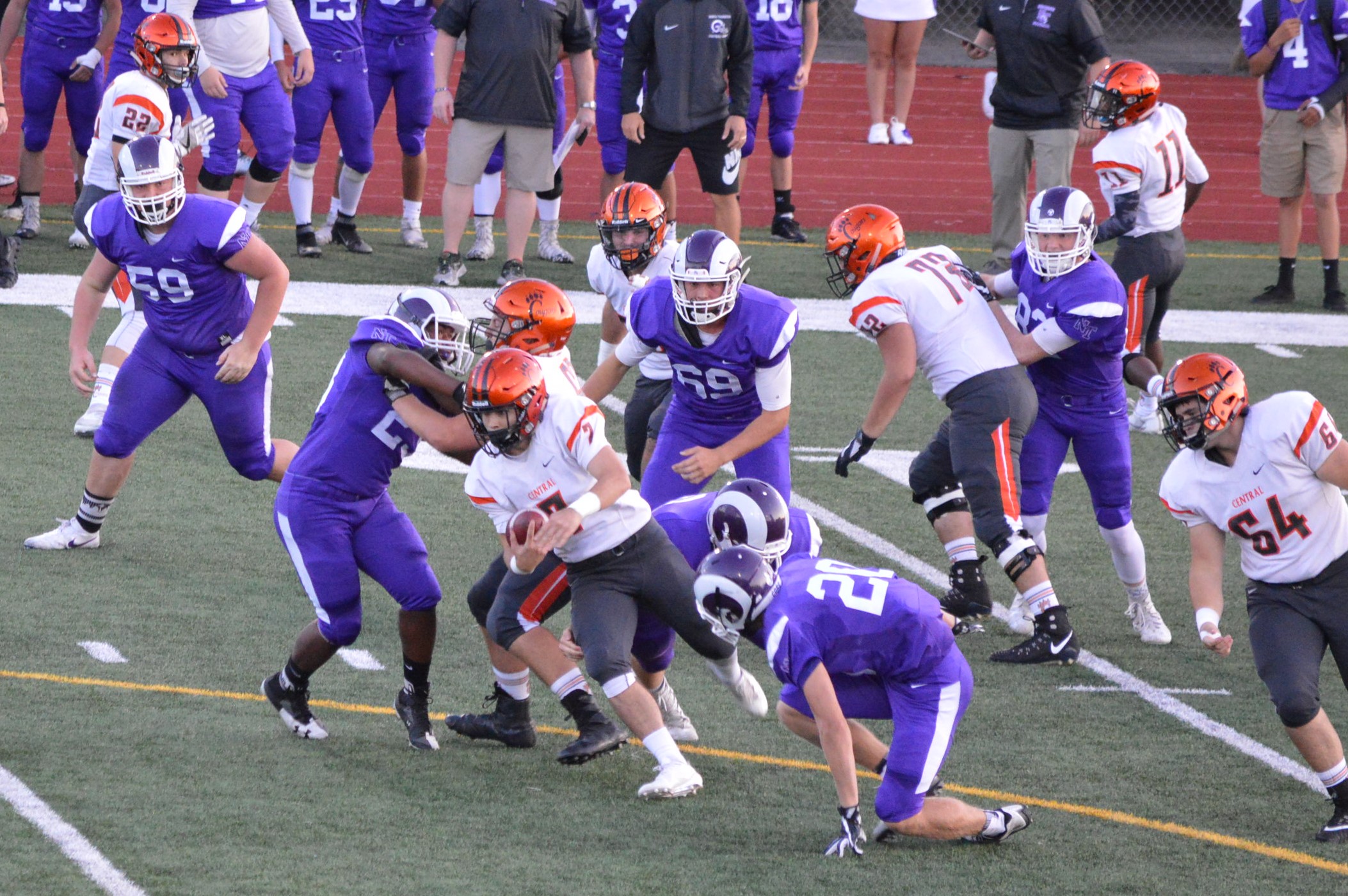 (Lacey, WA) The South Sound Conference kicked off league play Thursday night at South Sound Stadium in Lacey with Central Kitsap at North Thurston. the Cougars have their sights set on post-season play while North Thurston came into the season with a young team and Coach William Garrow knew his squad would be facing an uphill climb but looks for improvement each week.

Garrow isn’t happy he didn’t get the win but no doubt he is pleased with some of the progress his team made against the Cougars especially on defense. Meantime, CK head coach Mark Keel was getting frustrated with a slew of yellow flags in the 1st half and everytime his team would gain 20 yards it seemed like they would then go in reverse and give it all back either through penalty or mistake.

CK would finally put it altogether on their 3rd drive of the game in the 2nd quarter. QB Bradley Dykstra would hit Elijah McGee on a key 23 yard pass play to move the Cougs deep into Rams territory. Dykstra would find him again for 19-yards with a high throw and McGee would fight off a defender grab the ball and fall into the endzone for a 6-0 lead with 8:50 to go in the half. Ben Maxwell would hit his 1st of 4 PAT to make it 7-0.

CK added another score on their next possession after North Thurston turned the ball over on a 3 and out. CK moved the ball to their own 49 when Dykstra found wide receiver Tyler Tubbs on a slant about 20 yards down the field. Tubbs then did the rest with some nifty running and ending up in the endzone at the 4:53 mark and CK led 14-0 a lead they would take to the break. This would also earn our ProActive Physical Therapy Play of the Game.

Despite trailing 14-0 and 181-9 in total yards, the Rams opened the 2nd half with the ball and put on their most impressive drive of the game. The Rams ran off 8 straight running plays and got all the way to the CK 26 and faced a 4th and 3 when the Cougar defense stiffened and tackled RB Zion Kirk at the 24, a yard short and turned the ball over on downs.

After a change of possessions the Cougars would put the game away with their 3rd score of the game and McGee’s 2nd TD. McGee capped off a 68-yard drive with an impressive run around the left end down the sideline and into the endzone from the 14 to push their lead to 21-0.

CK would score their final touchdown midway through the 4th and was set-up by Ja’Quirius Conley picking off a Dylan Harn pass and returned it to the 24. Dykstra then stepped up and hit Tubbs who got pushed out at the 1. Dykstra then ran it in to make it 28-0.

Both sides then began substituting and the game got a little sloppy with several turnovers. North Thurston would get on the board late in the game when they recovered a fumble on the Cougar 15. Zion Kirk would punch it in with 1:12 to play in the game and the PAT was added to make it 28-7. The Cougars would then knee it and ran the clock out for their 2nd win of the season. CK is 1-0 in SSC play and 2-1 overall while North Thurston falls to 0-3.