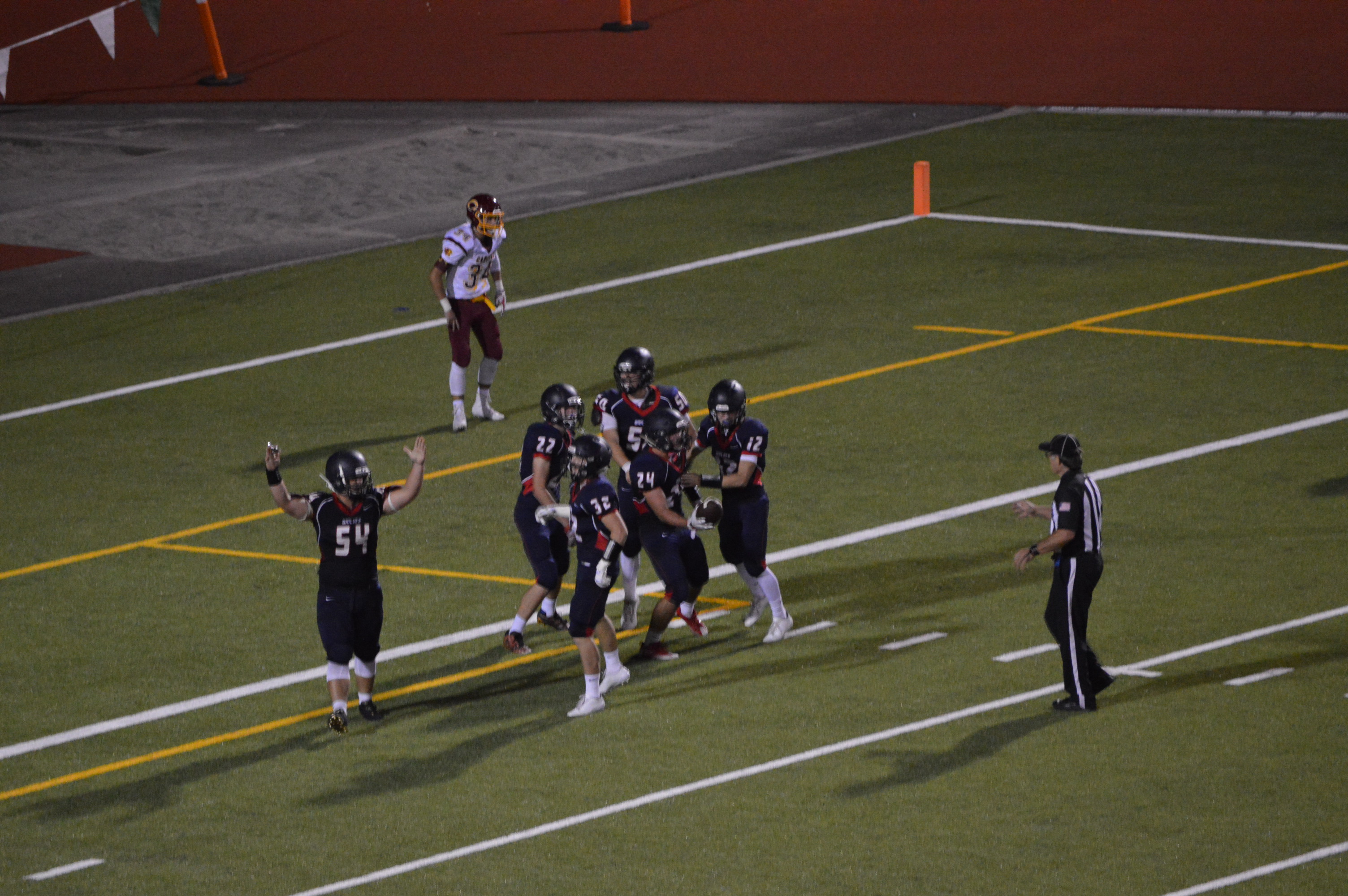 (Tumwater, WA) Credit to our ESN announcers in calling this game with just 1-second to play and Black Hills with the ball on the Capital 10-yard-line they said they felt a huge play was coming and wasn’t sure if it was offense or defense but something special was about to happen and it sure enough did and in fact a big play by both the offense and defense played out on the final snap of the game.

Before we get to that point let’s set up how this all came down to just one play. In the 1st half both offenses were moving the ball and defenses bent but did not totally break. The Wolves settled for a 22-yard field goal from Xavier Bacek on the opening drive of the game to take a 3-0 lead. Capital wasted little time in taking their 1st lead with a 77-yard touchdown drive capped off with a 4-yard touchdown flip from Grant Erickson to Jack Collard. The PAT was blocked to make it 6-3.

Both teams would stand pat until the Cougars final drive of the half where Coach Darren Tinnerstet went deep into the play book and pulled out the old flea-flicker where Scott Penner ended up with the ball rolling to his right and hit Carson Collard to get the ball down inside the 5. Nate Tyler would then push it in from the 1 on 4th and goal with just seconds left to play and Capital led 13-3 at the break.

In the 3rd quarter, the Wolves Andrew Wilmoth picked off his 2nd pass of the game and 3rd of the year giving the offense the ball on their own 31. Black Hills led by QB Ethan Loveless marched down the field and included a big 23-yard completion to Jacob Briggs. It looked like the Wolves were about to score from the 3 when Preston Lee fumbled the ball and Capital recovered inside their own 5.

Capital then began digging their way out of the deep hole but on 3rd down Zach Loveless sliced through the offensive line to sack the Coug RB on the 5. Capital lined up for a quick style punt kick but the ball was sent on a line-drive which Zach Loveless picked off in mid-air on about the 15 and returned it for touchdown. The PAT was no good but the Wolves were back in the game trailing 13-9.

The Cougar offense stalled again when Erickson threw his 3rd interception of the game this time it was Wyatt Rollman who got the ball on a perfectly timed dive for a ball that looked like it might be caught by the Capital receiver.

Black Hills took over on their own 35 just as the 4th quarter began and Capital twice put the Wolves in a 4th down situation but both times they came away with a 1st down. The Wolves worked it down to the 1 and Taylor Simmons twisted his way in and with the extra point Black Hills had their first lead since leading in the 1st quarter, 16-13.

Capital had a little more than 6 minutes to work with and put together their best drive of the night with a determined effort across the front. After a good kick return to their own 40, Eric Jackson who had run all first half had been held out until now in the 2nd half and he got things started with back to back 8 yard runs.

Capital had a critical 4th down of their own to get through and ended up with a 1st and goal on the 8-yard line. With less than 2 minutes to go in the game Erickson handed the ball off on a simple dive up the middle and went in untouched as the Cougs re-took the lead 20-16. It almost looked like the Wolves let Capital score but BH Head Coach Kirk Stevens says his linebackers simply felt Erickson was going to pass the ball and bailed out leaving the middle wide open for Nate Tyler to finish off the drive.

The left 1:29 to play for the Wolves with just 1 time-out. Simmons received the kick-off and returned it to the 29. The offense came on with just 1:22 to play. After 3 plays 50-seconds had ticked off the clock and the Wolves faced a 4th down. A stop here and the Cougars would notch their 2nd straight win. The Wolves had other ideas as Loveless dropped a beautiful 30-yard bomb into the hands of Briggs giving the Wolves a huge 1st down.

The Wolves then got the ball down to the 10-yard line close to the 1st down marker with just seconds to go and no time-outs left the officials may have saved the game for the Wolves when they stopped the clock with 4-seconds left to go to measure for the 1st down. Once the measurement was made which they were short of the 1st down and the sticks back in place the official started the clock and Loveless clocked the ball with just 1-second left to play in the game.

The Wolves then lined up for their last play of the game when Tinnerstet then began to use his time-outs and called all 3 in a row. So now you know how we got to 1-play to determine the winner of this game. As the ball was snapped the 1-second quickly expired and Loveless dropped back to pass. Pressure from the Cougs was getting to Loveless and he rolled to the right and his receivers also started to flood to the right side of the endzone. Loveless fired the ball before getting sacked and a Cougar defender got his hands on the ball but tipped it up and through his hands and right into the waiting arms of Kade Weitzel for the winning score.

The Wolves sideline erupted while Cougs were simply stunned like a punch to the gut. Weitzel was dogpiled in the endzone while the officials sprinted off the field. After the 2 teams shook hands the Cougars quickly exited while the Wolves basked in the glow of the win with each other and hundreds of fans who joined them on the field.

Both teams are now 1-1 for the season in non-league play. The Wolves play at Prairie next week while the Cougars will open SSC league play at home against Timberline. Our Pacific Sports Spa Players of the Game went to Black Hills’ Zachary Loveless and Capital’s Nate Tyler. Our ProActive Physical Therapy Play of the Game was the game winning pass from Ethan Loveless to Kade Weitzel.