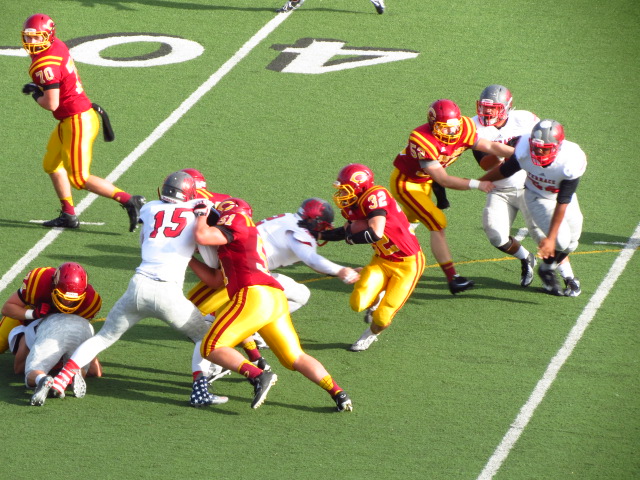 (Olympia, WA) The Capital Cougars Football team was informed today by the administration that an interim Head Football Coach was hired and he is someone familiar to the Cougs, Offensive Coordinator Darren Tinnerstet.

Tinnerstet takes over for former longtime Head Coach JD Johnson who stepped down late last month after complaints of a lack of supervision at a football camp more than a year ago in 2016.

With Johnson stepping down so late in the process one of the options District Athletic Director Jeff Carpenter told ESN they were considering is an interim to try and make this transition as smooth as possible. The job opening did draw several candidates looking for the permanent job but in the end the search committee was more comfortable with trying to keep this year’s team in as familiar surroundings as possible.

The coaching staff is staying intact and the up and coming Cougar team will see little change in the regular routine. Tinnerstet will open camp next Wednesday as scheduled. No doubt this season will also work as an audition for Tinnerstet if he wants the job permanently but it also allows both Tinnerstet and the administration to take a different course at the conclusion of the season.

The Cougars open their season on Friday, September 1st at River Ridge.

Here is a copy of the notification Capital Principal Curtis Cleveringa sent out to parents:

I am writing you to let you know that we have offered the position of Interim Head Football Coach for the 2017-18 season to assistant football coach Darren Tinnerstet. He will start his position on Wednesday, August 16, 2017.

Coach Tinnerstet has served as an assistant varsity football coach at CHS for several years and knows the school, football program and students well. Prior to his time at CHS, he was the head football coach at Sehome High School.

I want to thank everyone, parents and players alike, for your participation and patience in the selection of the new head coach. Please join me in welcoming Coach Tinnerstet to his new position.

We will do our best to reach all CHS football families with this communication, however, if you know of someone on the team who is not receiving this e-mail, please forward this message and have them contact us with their e-mail for future correspondence.