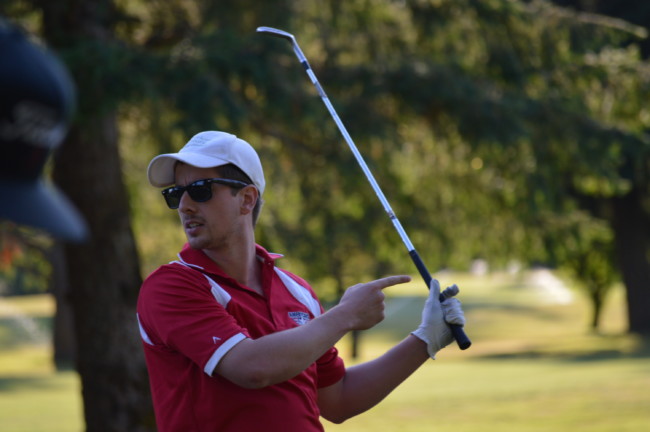 (Chehalis, WA) Once again the reporter became the story. Usually not what reporters ever want but in this case

Chroncle reporter Matt Baide breaks that golden rule of journalism and this year Eli Sports was happy to help him do it. The Million Dollar Shoot-out is a fundraising event benefitting the Visiting Nurses organization based in Lewis County. Visiting Nurses provides home healthcare and hospice for those who need it and one of their large fundraisers is their annual golf tournament which tees off on Friday. The tournament at Riverside Golf Course in Chehalis is overbooked and Executive Director Jenny Davidson-Collins says they actually not only had to turn away golf teams but they had to turn away sponsors. Davidson-Collins says they are on track to top $50,000 for this combined event and 100% of it goes to paying for home nursing care.

The Shoot-Out began last year as an effort to allow others who either can’t get into the tournament or are not available to participate and help the cause. So Visiting Nurses teamed with Pacific Sports Spa and owner Matt Noren to sponsor the Million-Dollar shot. The contest is simple 3 qualifiers get one chance to sink a hole-in-one from about 175 yards away. If it goes in you win $1,000,000. The event is covered by a specialized insurance policy that Pacific Sports Spa paid for to make sure every penny of the morning raised goes to nursing care.

driving range and the 3 closest to the pin qualified. This year they set out a kiddie swimming pool and qualifiers had to drop one in the pool to qualify. Believe it or not 2 of the 3 qualifiers from last year made it again this year including the defending champ The Chronicle’s Matt Baide. Baide is a sports reporter and photographer for the Chronicle and by the way the 27-year-old is a scratch or near scratch golfer. To qualify you had to purchase a “Shooter-Pass” which got you 10 balls to try and sink one in the kiddie pool. Baide blew through his allotted $20 without qualifying. So ESN stepped in and we could not stand for the defending champ not to be in the mix and put up the $10 for another Shooter-Pass and Baide did not disappoint. On his 2nd ball he sunk it to cement his chance at defending his title.

Baide would see Shane O’Rourke back in the fold as well, the 34-year-old local defense attorney was back in his trademark blue suit to win his 2nd chance at a million dollars. The repeat duo were joined by 18-year-old Will Alexander who just graduated from WF West and will be taking his talents to Spokane Community College as part of their golf team this coming year.

O’Rourke was the first to take his swing at a Million Dollars, last year the Million Dollar shot was on the par 3 6th hole, this year it was switched to the 18th hole so more people could watch and they set up the shot 175 yards from the pin which was located in the back of the green. Last year O’Rourke caught a branch on his shot that slapped it down well short, this year he pulled it to the left of the green.

Baide was next and launched a high and long shot that looked like it was coming right at the pin. The ball then slightly drifted to the left and landed just past the hole about 15-feet away but checked up and stayed put. Last year Baide was about 20-feet away to win the closest to the pin, this year he was closer but still did not cash the big prize.

To defend his title Baide had to survive the young up and comer Alexander. Alexander was impressive at the

qualifying but also needed several Shooter-Passes but finally clanked one in for the 3rd spot. The 18-year-old with a chance to significantly change his future with one swing of the club sent it high and to the right and hit short of the pin but then rolled off to the right to be about 30-feet from the hole, a great effort but not good enough for the money or to dethrone the defending champion.

Our deal with Baide was if he hit the Million Dollars we split it 50/50 but if he got the closest to the pin he gets all the prizes and he collected a foursome of golf at Riverside, a Day at the races at Emerald Downs and other prizes. The event is all in fun and raise money and awareness for a great cause and Baide was happy to be the story for such a great cause.