(Auburn, WA) If you have never witnessed the running of the Muckleshoot Gold Cup Indian 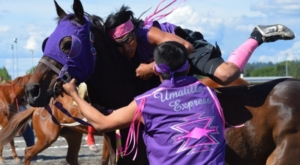 Relay Races it is a sight to behold and you should make plans to be at the track on one of these 3 days in 2018.

The relays go back 500 years and each heat is 2 miles with the rider switching horses every half mile or 4-furlongs. As the rider and horse approach their assigned exchange box the rider’s assistant flags them down much like a Nascar driver when they pull in to make a pit stop. The rider then jumps off and jumps on the fresh horse. Watching the riders do this you can see where the Pony Express riders of the early West likely replicated the style that the Indian riders perform so flawlessly. 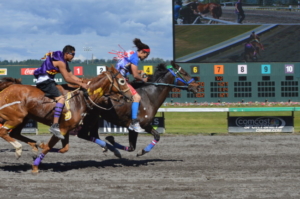 This event is not just an exhibition these teams that race are serious and they do this on a circuit throughout the summer. Teams participating come from tribes in Washington, Oregon, Idaho, Montana and South Dakota. There is serious purse money up for grabs with $55,000 on the line plus expenses the host Muckleshoot Tribe is putting up $75,000 for this event to be a showcase at Emerald Downs.

Additionally, Emerald Downs and Canterbury Downs have agreed to put up another $10,000 in bonus money if the winning team at Emerald this weekend wins the event at Canterbury when they host their Indian Relays in August. Teams that place in the top 3 at both tracks will get $2,500 bonuses. The Shakopee Mdewakanton Sioux Community will host the races at Canterbury.

There are 21 teams competing  and they are: 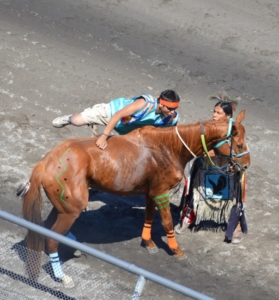 The championship team received belt buckles, jackets, the Muckleshoot Gold Cup and a $10,000 cash prize. And if Starr School also wins the championship heat August 26 at Canterbury Park, they would earn a $10,000 bonus.