5/15/17
Today at 3:30 the Black Hills vs Centralia District baseball play-off game will resume after being suspended in the top of the 1st inning on Saturday due to rain with the Wolves leading 4-0. The game will be played at the RAC in Lacey because they have turf fields and if it’s raining can still get the game in. The game will NOT be broadcast on ESN due to no dry area to broadcast but we will be there to tweet out scoring updates plus some live video on our twitter feed and will have the follow up story and photo gallery. KELA radio is planning on carrying the game and you can find their broadcast at http://www.kelaam.com/kelakmnt-sports-broadcast-schedule/

The game will resume from where they left off and that’s with Taylor Simmons for Black Hills at the plate with a 3-2 count and 2 outs. No the game does not start over and this is a loser out contest.
The Winner is then scheduled to play Columbia River at about 5:30 for the 3rd/4th seed. But with expected rain this afternoon and the long bus ride for CR that could change but at this time Tournament Manager Jeff Johnson the WF West AD says right now at 9:45am this is the plan. If the 2nd game can not be played then another way to determine the 3rd/4th seeds into Regionals could be used such as a coin flip. Johnson says they can play tomorrow if necessary at the RAC but will leave it up to the 2 teams who advance.
Johnson says they can not go past Tuesday because of pitching rules that require minimum amounts of rest would put the teams in danger of not being able to use a pitcher on Saturday in the Regional play-offs. There are 4 Regional 4-team tournaments held around the state on Saturday with 1 team emerging and advancing to the Final 4 in Yakima on May 26 and 27.
The District 3rd place team will play Highline at the Centralia Regional and the winner will play the winner of the WF West vs Eatonville Regional opener. The District 4th place team gets sent to the Auburn Regional against North Kitsap. The winner of that game facing the winner of the Tumwater vs Lynden Regional opener. 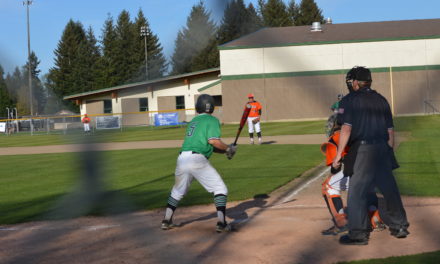 Baseball: T-Birds get walk-off “hit” in come from behind win over Tigers, evens season series