(Toledo, WA) This match was a re-match of last year’s District Championship in which United took in a 1-0 defensive battle and this was the expectation in this match. Add rain showers and an exceptionally bumpy field and the stage was set for a low scoring game and the 2 teams did not disappoint.

In the first half they would go 40-minutes without either side breaking and it was scoreless. United had more runs and scoring opportunities than La Center but couldn’t close any of the attacks with a goal. La Center had fewer shots but they were closest but United’s Alan Contreras came up with a beautiful save to deny the Wildcats the go-ahead score.

The 2nd half saw the Wildcats pick up the pace offensively while United didn’t have as many chances but still had plenty but in the end both backlines and keepers simply wouldn’t budge and the game ended up going to overtime. DeSean had a great save punching a shot over the bar in the 45th while Contreras ran one down from across the box just getting his finger tips and deflecting what looked like a sure goal.

Both keepers were also dealing with a slick ball on wet grass but yet were able to deny and defend. Helping with the defense for United were David VanVleck, Dawson Hall, Brandan Cruz and Brian Wood and playing shut down D for La Center were Austin Taylor, Cody Leffel, Jared Cox and Dylan Seaman.

The only crack in either defense came with less than 10-seconds to play in the 1st overtime on a scramble for the ball United’s Andreas Malunat launched a shot from about 30-yards away came in hot and high and clipped just under the crossbar when DeSean had no chance of defending although he nearly did it. Both keepers were so good we had to name each our Tommy Lowe of Greene Realty Players of the Game. Our ProActive Physical Therapy Play of the Game was an easy choice the game winner by Andreas Malunat.

Boys Hoops: Capital runs over River Ridge in a non-leaguer 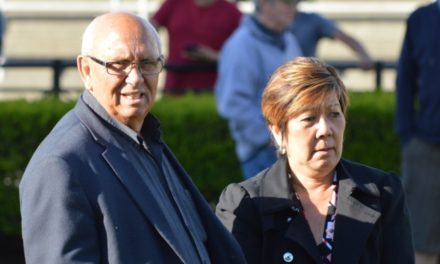