(Centralia, WA) The Evco 2A league does have 2 more teams than the past 2 years but still there are only 6 teams, which makes league matches even more important and so when you have a chance to post a win it is a big deal.

No doubt both teams wanted this win with the Wolves 2-0 in league play and the Tigers 1-1. Black Hills got off to a good start winning the 1st set 25-22. Emily Larson and Maisy Williams had a pair of big serve turns late to give the Wolves a 23-22 lead with Kayley Moloney serving. Moloney got the 1st point and then dropped in an ace for rhe game winner.

Centralia would battle back and cruise to the 2nd set win 25-15 and it could have been worse. Danika Jensen took-over the serving for the Tigers trailing 3-2 and when she was done Centralia had a 10-4 lead reeling off 8 straight points. Kary Sathre also had 3 points from the service line and killed several shots with her overhead lefty shot time and again.

The Tigers would then fall behind the Wolves in the 3rd set 18-15 when Sathre started the comeback with 3 service points and a monster kill in that run. Mckenna Smith would run the table for the Tigers and scored the final 3 points to clinch the win. Smith also was huge at the net all night following through with several blocks and kills. The Wolves were now in a must win position.

In the 4th set Centralia was poised to end the match 3-1 when they pulled into a 17-17 tie. Wolves coach Jessica Prigge made a big decision at this juncture and sent Freshman Ainsley Campbell into the match to serve. Campbell fired off 5 straight points giving the Wolves a huge 22-18 lead after she was done. Campbell got big help from Emma Duff at the net with a huge kill and block for 2 of those points. Emily Larson finished off the Tigers at the line and the match was tied 2-2 sending it to a 5th and deciding set.

The Tigers jumped out on the Wolves in the 5th set 5-2 behind the serving of Rachel Wilkerson. After a time out, Sydney Sims scored 3 of her own points  to tie it 5-5. Emma Duff took over with a 7-6 lead and scored 3 to make it 10-7 and on the Tigers serve Black Hills’ Alexa Klotz hammered home a big kill shot for the 11-7 lead which would be too big of a hole for the Tigers to dig out of and the Wolves would post the 15-11 win taking the match 3-2.

Black Hills is now 3-0 in league play, 4-3 overall while the Tigers drop to 1-2 and 2-5 for the season. Our Tommy Lowe of the Greene Realty Group Players of the Game went to Black Hils’ Emma Duff and Centralia’s Kary Sathre. Our ProActive Physical Therapy play of the game went to the 5 serve run of Wolves Frosh Ainsley Campbell turning around the 4th set to force the 5th.

Volleyball: T-Birds bounce back with a convincing win over Bearcats 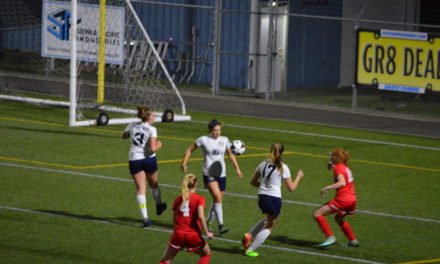