The District 4 Baseball Tournament reached round 2 on Wednesday with 2 Semi-Final games and 2 loser out consolation contests. Below are stories and pictures and links to more coverage from all 4 games.

(Centralia, WA) Coming into the season of the Evco 2A all four schools looked like they would be neck-a-neck but in the end 1 team would separate themselves with consistent play from start to finish and that was the WF West Bearcats. The Cats would jump out to a 4-0 lead on the Hawks before Hockinson would close the gap to 4-3. That would be as close as they got as the ‘Cats added an insurance run for the final 5-3 margin and with that advanced to the District Championship game on Friday but more importantly will be in the State Tournament’s Regional round next weekend with a chance to make it back to the Final 4 in Yakima. Hockinson will next play RA Long in a consolation, loser out game on Saturday at 1:30.

For more coverage on this game:

(Centralia, WA) There is no bigger story out of this Tournament than the apparent Phoenix rising of the Tumwater T-Birds. This is the team that lost their final 3 regular season games including a 12-2 pounding from crosstown rival Black Hills in a game to determine 3rd and 4th place. After taking that beating they were forced into playing not 1 but 2 loser out play-in games with a 3-1 win over Aberdeen and a 5-4 comeback win over Hudson’s Bay and in fact trailed 4-0 at one point.

Flip to this week and it’s like a whole new season and Tumwater not only is making noise they are devastating their opponents 1st beating GSHL #1 seed Ridgefield 16-11 after taking an 8-0 lead in the 1st inning. On Wednesday they got Centralia who beat the ‘Birds twice in the regular season but their bats remained on fire jumping out to a 10-1 lead that the Tigers could never recover. Tumwater has now advanced to the State Regional round of State and will play WF West on Friday for the District Championship, Centralia drops into the consolation and will get Black Hills on Saturday at 11am.

For more coverage on this game:

(Chehalis, WA) The Black Hills Wolves have been in this position before, in fact just last year. The Wolves advanced to the Regional round of the State Tournament for the 1st time in school history but they had to do it the hard way and battle through the consolation bracket of the District Tournament winning 3 games in a row to claim their spot in history.

They got off to a great start in trying to duplicate that feat with a 10-run win over Mark Morris. It wasn’t your typical 10-run, 5-inning game it took nearly 2 and half hours to complete but a 6-run bottom of the 5th put the game away keeping theirs hopes alive while the Monarchs season came to an end.

The Wolves started off with a 2-run 1st inning. Ethan Loveless walked and while the 2nd batter Nate Hutson was at the plate, Loveless stole 2nd, an attempted pick-off move by starting pitcher Dawson St. Jean sailed into centerfield when neither the 2nd baseman or shortstop broke for the bag and Loveless was off to 3rd. Centerfielder Cody Geurnsey got to the ball and overthrew it to 3rd base and Loveless scored…and Hutson had only a 2-1 count. This set the stage on what kind of game this was going to be and there was plenty more to come. Hutson would walk and eventually score on a 2-out RBI single from Milo Ames and after 1 the Wolves were up 2-0.

The Monarchs were their own worst enemy committing at least 6 errors and one of those would lead Nik Quartano for Black Hills to get on base. Quartano would take 2nd on a wild pitch and move to 3rd on a grounder to 1st by Taylor Simmons. Loveless would lift one to right field that looked like it might get down for an extra base hit but Jordan Frost made a great play but it would drive in Quartano on the Sac fly and it was 3-0 after 2.

Black Hills would add to their lead in the 3rd with 4 runs. They would send 8 to the plate with Cole Lester leading off with a double. Then Milo Ames showed the big guy can run slamming a gap shot and sliding in safely for a triple knocking in Lester. Nate Brosio then got on when a fly ball was dropped in the outfield by Geurnsey. Brosio then stole 2nd and moved to 3rd on a solid base hit from Alex Bowden. Quartano picked up Brosio with an RBI single and Bowden would score on a grounder by Simmons and the Wolves were in control 7-0.

After a scoreless 4th inning, the Monarchs would finally break through and end up chasing Wolves starting pitcher Jaycee Miller. Miller began the game striking out the side in the 1st inning. It looked like he would cruise through the 5th as well striking out the lead-off hitter. Devin St. Jean then singled, only the 2nd hit in the game for Morris. Miller then lost Brent Myklebust and walked him putting runners on 1st and 2nd. Miller then got his 8th strike-out and it looked like he would escape the inning with no damage but Lane Spenker put a charge in a ball and 2 runs would score on the base hit. Dawson St. Jean followed that up with an RBI stand-up double and that would be it for Miller. Jake Perry came in and got the final out with a strike-out but MM lifted their hopes of a comeback now trailing 7-3.

The thoughts of a comeback were quickly doused in the bottom of the inning when Bowden got on by another error and Quartano walked. Taylor Simmons then may have been the key to the inning when he attempted to bunt the runners over but the ball hit him and the umpire ruled he was out of the box and therefore out. But after  discussion with the field umpire the call was overturned and Simmons did lay down a bunt moving the runners over  while reaching base safely when no one covered 1st base on the play and the bases were loaded with no outs.

Ethan Loveless then slapped a 2-run base hit and it was a 9-3 game. Nate Hutson followed that with an RBI base hit and it was 10-3. Lester hit into a fielder’s choice for the 1st out and Austin Parr, who had struggled at the plate in this game, made big time amends with a base hit driving in 2 more runs to make 12-3 and now 1 run away from ending the game. Milo Ames would walk and was followed by an intentional walk to Caden Lassley to fill the bases. Alex Bowden, with the infield in on the grass and the outfield in close to try and cut down the winning run at home lifted one to right field but not deep enough as Frost caught the ball and Wolves coach Todd Venable held the runner Nolan Reynolds who came in to run for Parr. Tanner Ivie then came to the plate with 2 outs and the infield outfield still in for some reason with 2 outs he punched a base hit through the drawn up defense scoring Reynolds for the game winner. This hit would also be named our ProActive Physical Therapy Play of the Game.

The Wolves live to play another day and they will face a familiar opponent on Saturday at 11am the Centralia Tigers in a loser out game. Black Hills will have to beat Centralia and then the winner of the RA Long vs Hockinson game to get back to the District Tournament. Our Tommy Lowe of the Greene Realty Group Players of the Game were Milo Ames for Black Hills and James Manthe for Mark Morris.

(Chehalis, WA) The Ridgefield Spudders came into this game somewhat stunned by what had happened the day before losing to the Evco 4-seed Tumwater as the GSHL Champions. Surely they expected to win but no way they dreamed of trailing the T-Birds 8-0 before they even got a chance to bat and wound up losing 16-11.

They were now facing a team they had beaten twice in the regular season the RA Long Lumberjacks. The Spudders were the visitors in this game and focused on getting off to a fast start and looking to avoid another big inning from their opponent. They checked the 1st box putting a run on the board in the top of the 1st. After a strike-out, Michael Martin would walk and then move to 2nd on a balk by Jacks pitcher Gunnar Blix. A fly to center sent Martin to 3rd and he would score on a 2 out RBI single by Spencer Anderson, the Spudders starting pitcher and he helped his own cause spotting himself a 1-0 lead after 1.

Now the 2nd box to check, keeping the Jacks in line but lightning would strike again as RA Long pounded out 4 hits sent 8 to the plate and posted a 5 spot. Anderson walked Coby Rothwell to lead off, he was driven home by Jacob Childers with an RBI double. Andrew Walling followed that up with a shot to the right-center gap for an RBI triple. Jace Childers then drew a walk and that was followed by Blix also helping his own cause with a mammoth blast off the fence about 340 deep missing a round tripper by about 2 feet. The stand-up double would score 2 more and it was 4-0 with no outs. Blix would score on a Tanner Hulings RBI single and after 1 the Jacks led 5-1.

Ridgefield would get back in the game in the 3rd scoring 3 runs. Boston Clark got it started with a lead-off triple. He scored on a Brian Gillenwater RBI single which was followed by a base hit from Michael Martin. Kevin Miser came through with a base hit knocking in the 2nd run and Jeremy Martin would tap a grounder to 1st that would score Michael and going into the bottom of the 3rd it was a new game with the Spudders now down by just 1, 5-4.

The Jacks would answer in their half of the 3rd with Blix walking, followed by a strike-out and a walk to Hulings. Blix and Hulings would move up on a wild pitch when Parker Reeves flied one to the outfield scoring a run on the sac fly. Kaden Vanderwerf would drive in the 7th run for RA Long on an RBI single and it was 7-4 after 3.

The Jacks would add an insurance run in the 5th when Brett Coons singled and moved to 2nd. He was replaced by Owen Enriquez at 2nd. Enriquez would score from 2nd when a throw down to 2nd went into center field making it 8-4.

The Spudders would only manage 2 more base runners over the next 3 innings on a hit by pitch and a walk but never seriously threaten the 4-run lead and saw their season of promise go up in smoke primarily based on 2 1st innings they would love to replay. Ridgefield lost by a combined score of  24-15 in these 2 district games and they gave up more than half of those runs, 13, in the 1st inning.

RA Long stays alive and will play Hockinson on Saturday at 1:30 at Wheeler Field in Centralia in a loser out contest. The winner will play the winner of the 1st game on Saturday between Centralia and Black Hills. Our Tommy Lowe of the Greene Realty Group Players of the Game went to the Jacks’ Andrew Walling who also came in to pitch the final 2 innings and for Ridgefield Boston Clark.

Our ProActive Physical Therapy Play of the Game goes to RA Long’s Brett Coons for a beautiful bare handed grad of a chopper to 3rd and throw out at 1st to start the top of the 7th inning.

Baseball: Playing a full schedule not likely for many teams 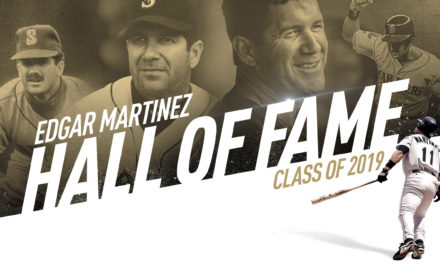